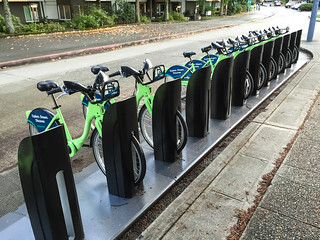 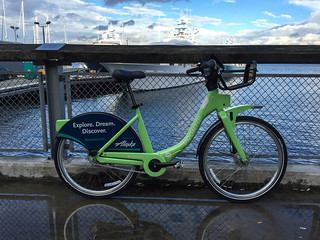 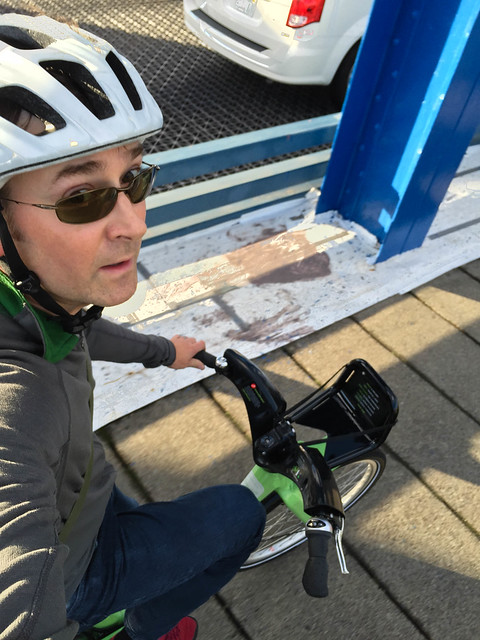 I promised some photos of the re-cockpitted Miyata, and it was light out when I rode in today. It was a nice misty day by the time I got downtown.  The fog started as I neared the Sound, and I was covered in wet mist by the time I got to work. Another beautiful Seattle commute!

Comments on the setup:

For a few years on my commute from North Seattle into Downtown, I was often annoyed when an oncoming cyclist held up his hand to block my light from his eyes.  I noticed that it was the same guy, and my reaction was initially anger.  I was like how dare you act like my lights are annoying you when they are necessary for my safety in the darker times of my commute.  I am just now starting to understand this fella’s angst…

I bought into the common wisdom that more must be better, and so was on the path of MORE wattage, MORE blinks, MORE patterns, etc.  These lights are bright, so they must be MORE safe since drivers have to notice a blinking light in a sea of steady night lighting.  FUD.  It seems that in search of constant upgrades for new sales, “excessive” products are often pushed here in America – the land of fake safety.  When does this really end?  When cyclists are relegated to wearing bright lime-green reflective strobe encrusted LED sumo safety suits?  I can just see the headlines.

“Cyclist killed.  Was not wearing the ACME strobe suit.  No charges for the motorist who explained – I never saw him…”

After using blinking lights front and rear for a few years, I’ve now switched to steady dynamo lights powered by my front hub.  Besides the amazingly better light coverage and visibility I get from my Schmidt and B&M lights, I’ve formed into the opinion that blinking lights are, at best, less effective than steady beams, and most of the time just pointlessly dangerous for both the rider, and the people they are approaching.  Most of the popular “blinky” lights are toys for the uninitiated fearful commuter to waste money on and throw away after a season or two.  It has also been argued that blinking lights can actually draw drivers (drunk?) into collisions with cyclists, much like moths to a flame.  Update – another link on the “moth effect“.

If you are using a blinking front light, I would question that you have any ability to see what you’re riding toward.  Judging distance is greatly impaired under strobe light.  Just try playing baseball, football, soccer, or basketball under a strobe.  Tennis would be hilarious.  So would car racing.  Hmmm – or bicycle commuting.  I’m actually surprised people manage to keep it together as much as they do, though I would bet that most folks turn off the forward strobe after doing this for a few months, and the people I see using them are just the endless stream of the newly initiated to the glory of the new commute method where they also get exercise.

OK – for those that graduate from using blinking lights, what’s with the flashlight beams?  Why do manufacturers continue to just repackage flashlights into a bike mount?  This type of light has no cutoff to keep light from being directed directly into the eyes of oncoming traffic (or cyclists).  This is completely idiotic – it’s relatively simple and cheap to use mirrored reflectors to put all that nice light below head-level and on the road in front of you where you need it.  Cars haven’t had these kinds of lights for 40 years.  If normal traffic (which even on a bike path, we are a part of) used circular beam flashlights, everyone would have to have tinted front windows, and we would likely have many accidents caused by oncoming blinding lights.  When someone with a 600 lumen flashlight beam is coming at me on the Burke-Gilman path, I have to look away from them, and not track their progress as I approach.  That’s just not safe.  I always worry that I’ll miss the unlit pedestrian that is between us, or worse, veer into the approaching cyclist or their buddy pedaling next to them.  Wow – how annoying are these devices!  Wake up folks – you are just pissing off your fellow bikers and making things less safe.

Courtesy and common sense can make cycling a lot safer and more enjoyable:

Some questions to ponder:

Give steady lights a chance.  If you are really concerned with your safety, read the stats.  You are 33x more likely to be killed in a passenger car, and 7x more likely to be killed as a pedestrian or on a motorcycle.  Bikes are a safe and healthy method for commuting.  Your visibility and view of the road ahead is made better with good, safe, focused European standard dynamo or battery lights like those made by Busch & Muller or Schmidt.  These are not too different from the modern lights on automobiles that keep the light focused and bright where you need it.  Think about your fellow cyclists, too.  It’s a growing community, and we need to be kind and safe around each other.

These are pictures from my 2nd day of testing the new Panasonic GX7. Today I used the Olympus 45mm lens, and stopped for a couple hundred pics. Needless to say it was a slow commute. Notes from the rides:

1. There are some really big propellers near the trail in the shipyards by the Ship Canal trail.
2. I finally saw the fire training area being used!
3. The harvest is happening – grain freighters have been loading at the terminal for the past two weeks.
4. I have a really beautiful commute! Must never move…

Some pics from a test I’m doing comparing an equally lensed Panasonic DMC-GH2 (mine) with a new Panasonic GX7.

I really like the feel and build of the GX7 so far, and the photos look great. Now I just need to figure out if it’s worth the upgrade.  Can you tell which pics are GH2 and which are GX7??  I’m using the same lens on both cameras (Lumix 20mm f1.7), so it’s a fair comparison.

Anyhow – this is my Rivendell Hunqapillar set up monster-cross style with dyne lighting for the winter commute.

It has been a fast, comfortable ride for the longer commutes I’m doing now that fall is upon us.