This was my second Chilly Hilly. It was a fresh day in the upper 30’s, with light snow between sun breaks. I felt great on this ride and tried out some new foods to see how I would react for later, longer rides. I felt great on the second half of the ride. No sign of the bonk that I hit at the 30 mile mark on my last Populaire. The only thing I would change is the pure number of cyclists. I did this one solo in a sea of 5000+ bikers. If I’m riding alone, I’d prefer to just be alone.

SIR, weather, when not to ride

There are times when I am excited about a ride and really can’t stand when it doesn’t work out.  Back in my youth, I would usually just suck it up and do the ride, whether it was good for me or not.

Last weekend was a scheduled SIR ride that sounded great, and would have been one of my longest rides to date.  It was a 130k (~80 miles) circle starting in Conway, and turning back south in Bellingham.  It was set to come down Chuckanut drive – one of the more scenic Washington coastal drives.  I was pumped up and ready for it.

Unfortunately, the weather didn’t cooperate.  The first sign was that my newish riding buddy was hedging that it would be too wet.  I determined to try to at least get up to the start and see how it looked.  However, when 6am rolled around, I looked into the Bellingham weather.  The gusts I had been hearing that night were getting worse.  There was a “wind advisory” predicting 55 mph gusts, with special attention to be careful along the coast.  It was of course going to be a headwind starting at the halfway point.

With not too much thought, I rolled over and went back to sleep.  I want my randonneuring experience to be fun.  Not a chore.  Next time will be better…

I’m starting to do randonneuring this year, and had some hand numbness with the Porteur bars on my last Populaire 100k.  While I could probably tweak the angle a bit and suck it up, I sense that I may be in the minority with these bars on the longer rides, and there may be logic behind everyone else using drops.  That said, I’ve had my problems with drops in the past, having tried 46cm Nitto Noodles, and 45cm Nitto Randonneurs with little love. 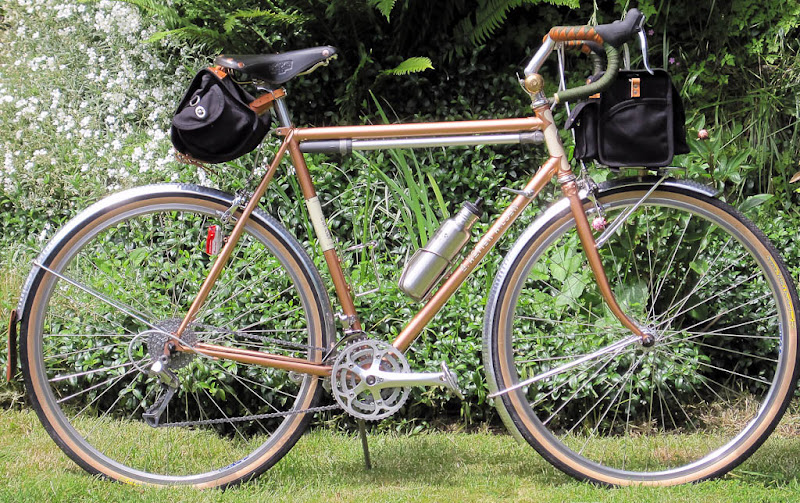 As I have a bit of bike ADD, I had an old Nitto bar that came off my mom’s 80’s Soma (old Japanese brand, not new San Fran brand) road bike.  I cleaned them up with a bit of the Simichrome, and they looked so nice, I just had to try them.  They are significantly thinner than the other drops, at 39cm.

I did a bit of comparing the feel of these bars with the Randonneurs I still had on hand, and I liked the way they felt.  Hard to describe, but smaller, better fit with my smallish hands, and shorter reach.  The drop is similar, but without the flare out.  I figured I had to try it out on a longer ride.  I am partial to traditional stems, but I knew that one of the issues I have had with drops is the lack of a “sit up” position.  This made a short stem critical.  As these bars are 25.4mm centers, my Nitto Periscopa stem gave me both a short reach, and sufficient rise to get a 2cm positive height above my saddle without looking like I have 8 feet of stem.  It definitely still looks a bit odd, but less so than my past experiment with Noodles on a 10cm Dirt Drop stem.

I also wanted a more subtle wrap that would still match my saddle, have the harlequin diamond pattern I love, but not stand out.  The copper and silver on this bike already makes it look a bit on  the showy side, so a nice green was what I was aiming for.  I used blue and green Newbaums cloth tape with two coats of amber shellac.  This matches the seat well, and should come out a bit over time as the shellac wears off.

A few long rides scheduled over the next few weeks will tell me if this is the setup for the year.  My 17 mile round trip commute test passed the bars with flying colors.  I love the narrower feel that makes me seem a bit more aerodynamic.  I also like the upright fit of the bar height, but the deep drop lets me get into the power zone when I need to push.  I had to lock up the brakes as I was following someone who had to do a quick stop on a downhill when a car pulled out in front of her.  Did this easily from the hoods.  It gave me tons of trust in the Suntour Superbe and Silver Sidepull with salmon pads I’ve been using.  Who says old stuff doesn’t perform?  Idjits…

I like to minimize my front derailleur throw to two chainrings, and with modern cassettes like the Shimano HG61 12-36t, you don’t need a triple anymore unless your are really slogging up 20% grades or running a hundred pound cargo/touring bike.  I don’t find myself in these situations, and my knees are still fairly stable.  As such, I wanted to try a double that was lower than the XD2 crank I was using.  Since it only had one bolt circle diameter (110BCD), this resulted in a minimum chainring of 33t.  Here’s a handy chart from the venerable Sheldon Brown pages.  This was a bit too much for the really steep hills.  I want something that is more “granny” for the Seattle pitches I find myself climbing on the daily commute.

Because I’m partial to the XC Pro (it was my first and favorite mtb), and I would be able to use the outside ring bolts for both rings, I opted for this setup.  My current bottom bracket is a 107mm SKB, and it results in a fairly narrow tread.  By putting my rings on the outer bolt, it results in a better chain line for this setup.

As you can see, I’ve left the inner ring empty:

In using a 32t chainring with my new cassette’s 36t big ring, I have a 24 gear inch setup for the low end.  This goes up to 103.5 gear inches for my 46t-12t big chainring small sprocket combo.  That’s as wide as most triples these days, and allows me plenty of gearing for most anything I’m riding.