I always come back to the Porteur and basket setup.  It seems to be the most consistently comfortable and useful cockpit I’ve had on my commuter/road bike yet.  I’ve had about 6 revisions including: 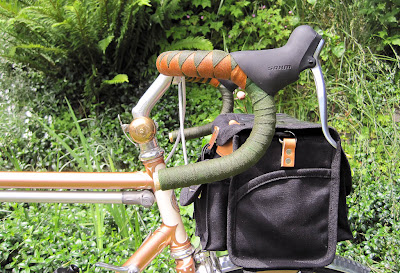 I also have tried the Nitto Albatross and Moustache bars on another bicycle.  I enjoyed both, and I am slowly learning how the stem, bar height, and angles need to be adjusted differently to get a comfortable setup.  It makes me realize that I am lucky to enjoy working on my own bikes.  If I had to go through the trial and error of getting to this point through a local bike shop, the process would have been a bit longer, and more spendy…

I was on a tech conference trip in Santa Clara last week, and decided to make the trek up to Rivendell headquarters since I was in the area.  This was my second visit since getting my A. Homer Hilsen in 2009.  A co-worker tagged along for the ride, and we had an enjoyable morning in Walnut Creek.  After I found my way up to the garage that is HQ, we walked into the first bay, and true to the last time I visited, nobody was there.  We were browsing around for only a short time, when who else but Grant Peterson himself came in and asked if anyone was helping us.

I asked him if I could take a couple bikes out for a spin, and he asked me my PBH.  Within about 5 minutes, he had set up 4 different bikes for me to ride.  They were all different in a big way:

My observations were that the Hunqas felt very similar from a frame perspective – they both felt like a nice solid steel frame mountain bike.  The cockpits were different, and I found that I really like the moustache setup.  I think it felt familiar to me since I’ve ridden the VO Porteur bars quite a lot.  The smaller frame was also a comfy setup for a mtb for me.  It was probably my favorite ride!  I found the Bombadil to be a bit large for me, but only when I stopped and moved up towards the bars – that tube slopes up quite a bit.  I didn’t really dig the bullmoose bars, but these were the very long reach versions, and since it was a big bike, it was just sized wrong for me.  Besides the sizing, I was in love with the frame, and I felt that the weight was not noticeably worse than a simple diamond frame.  Same observation on the Hunqa.  The SimpleOne was great, but I didn’t like Albas on it, and the Grip Kings weren’t better than my RMX Sneaker pedals (at half the cost), so it sort of fell down my list of bikes to eventually get.  I think I like gears too much.
I picked up some shifters, pedals, wool, and various other items, and vowed that I’d be ordering something soon.  Everyone we talked to there was helpful.  Grant’s got a great business, and his customer service model is to be envied.