When I decided to try out the insane sport of randoneurring, I quickly found that my iPhone running my tracking app, RunKeeper, was not going to work.  The battery only lasted 4 hours in GPS mode, and these rides started at about 4-5 hours.  I ran out and picked up a Garmin, as these things still take AA batteries and go for 25 hours before expiring.  After riding it on one brevet in March, and fiddling/cursing the old mode of convoluted GPS UI/OS the Garmins use, I launched it off the handlebar mount on a large bump on the commute home one night.  I didn’t notice it was gone until I came to the next stop light, and after circling back to the likely area, it was never found.  After weighing the logic of dumping another $200 into a device I found cumbersome, I decided against it.  The iPhone has GPS and will always have a more competitive app arena that will ensure the best GPS experience.  Already, apps like CycleMeter, MotionX GPS, and RunKeeper have better UIs and more specific usability features.  Now I just had to find a way to use my dynamo hub to power both the lights and the iPhone.

There are a few options out there.  Peter White sells some chargers, Wahoo makes a case with built in battery, but I settled on the BioLogic ReeCharge system that is made up of a case/battery combo, a handlebar mount, and a dynamo charging system.  The setup was very straightforward, and I used my older iPhone 4 with it for the first few weeks (in case it launched, as well)

I had no issues with the case coming loose on both road and trail over the past month or two of use.  I have put a couple hundred miles on the bikes with the case mount, and gone over some knarly bumps, but the case has held fast.  This is by no means an exhaustive test regime, but it has certainly done better than the Garmin I had.  Wiring on both bikes was simply a matter of merging the light and ReeCharge wires at the clips that attach to the hub.  This took about 15 minutes at most.  The other end just plugs into the handlebar mount.  I honestly had a tougher time figuring out what to do with all the extra wire.  I took a couple different tacks on the two bikes.  On the Hilsen, I wrapped the extra around the handlebar mount, as I was trying to minimize the wiring down on the frame:

On the Hunqapillar, I coiled the cable around the shifter cabling.  I did this one first, and didn’t like the result, as it is more visible overall:

The dynamo unit is strapped to the back of one of the fork legs, and simply held in place by zip ties.  Here are some pics of my wiring on the Hilsen.  I followed the basic process that Lovely Bicycle had posted a while back to keep the wiring as invisible as possible, while still being an easy job that doesn’t require any frame drilling or fiddling.

Cabled up to Bar Mount

More images of how the lighting cables are run are found HERE.

One of the big influences in the modern bike renaissance of steel frames, leather saddles, 650b wheels, fatter road tires, and all around comfortable fun biking is coming to Seattle on Friday, May 11th to talk about his new book “Just Ride – A Radically Practical Guide to Riding Your Bike”.  I have one of his bikes and can attest to the well thought out design, beauty, comfort, and detailed execution of a Rivendell bicycle.  He designed and marketed bikes for Bridgestone in the US from 1984-1994, introducing much loved iconic bicycles such as the RB-1, MB-0, and the thoroughly offbeat and cult status XO-1.  His writing and design of the Bridgestone catalogs and Rivendell Readers has drawn a good-sized following of serious bikers who didn’t (and don’t) follow the mainstream race fork of bicycle marketing and industry.  Jan Heine of Bicycle Quarterly did a great write up on him a few months ago on his blog: http://janheine.wordpress.com/2011/12/28/people-who-have-inspired-us-grant-petersen/.

I’ve met Grant a couple times at his humble company headquarters in Walnut Creek, and he is the kind of personality who exemplifies the caring, leader of a modern American small business that treats its employees and customers well, and seems to make it through rough economic times (as well as good times) without trying to sell and appease towards only short term profits.  Dude’s got it going on!  He finds and markets products that are higher quality, longer-lasting, and may not be available if it were not for Rivendell’s market pull.  The variety of things you can find on the Rivendell site boggles and really shows the unique mind that is Grant.

He will be talking about his latest book and answering questions on Friday, and I would love to give him a warm welcome to Seattle.  I will be leading a ride after his discussion that will be a flat and casual tool down to the locks and Golden Garden Park.  Specific details are below:

Seattle Bike Commute in November, a set on Flickr.

I took a few photos on my early November bike commute to get a feel for what my ride looks like. It wasn’t too busy, but it gave me a sense of how hard it is to photo a ride in the city chaos. This was over 2 days riding two different bikes and routes. Enjoy!

I’m a convert to front racks, baskets, and nice canvas bags.  I currently use an Acorn Boxy Rando bag on my Riv, and a small Sackville Saddlesack for tools.  On my “donut bike”, I have a medium sized Wald basket with a Riv Shopsack that I totally love. 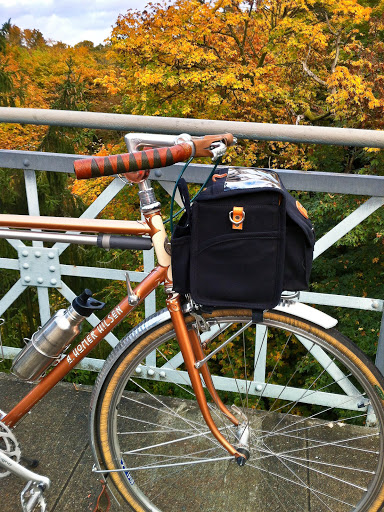 I was planning to try out the “low-trail” design, but I’m having trouble justifying getting a new bike just to test this.  I recently rode a few low-trail bikes at my LBS.  I tried a VO Polyvalent, and a Rawland rSogn, but they felt not too much different than my Hilsen in terms of stability with a front load.  I think I just key into trail less than some. 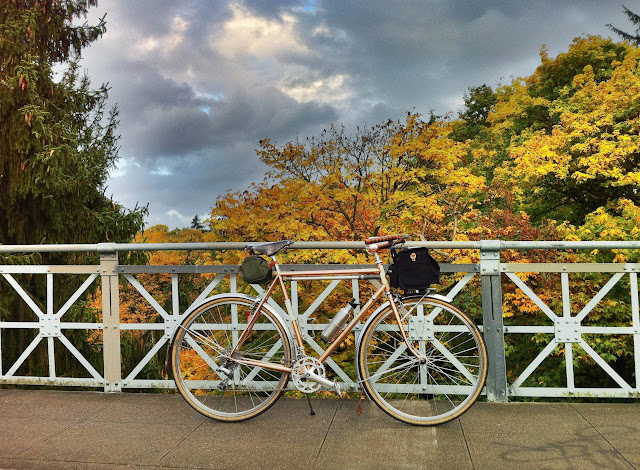 Fall Foliage on the Bridge

I am currently using a Mark’s Rack on this bike.  As I want a bit more platform for the Rando bag, as well as the basket I have been known to sport, I ordered a Nitto/Riv Platrack to add to this.

I’m probably going to experiment with the struts.  They are supposed to run to the eyelets at the front axle, but I’m more interested in having the same supports from the mid-fork eyelets hold this guy in place.  I think it would look cleaner.  I’m also worried about having more reinforcement from the bottom of the fork, as it may stiffen up the fork in a bad way.  It’s probably psychological, but I’ll see if I can get a quantifiable feel for this.