As a follow up to my post on trail, this is a related experiential review on the role of bar width and the interaction with trail.  This may impact someone’s decision on whether high or low trail is right for them by basing it on one’s comfort with wide or narrow bars.  It also may impact the decision based on what you will be using the bike for, and where you plan to do most of your riding.

On my Vélo Routier, having narrow bars is comfortable, and I have no problem putting feedback into steering even at higher speeds.  I currently use 42cm Noodles, and have plenty of control.

Wide bars (48cm and wider) work very well on higher trail bikes.  They give you the leverage you need to turn during even an “in the rails” higher speed maneuver.

The further away from your steering axis you have your hands, the more they will have input on steering – this is true for any bike and any amount of trail.  To get a consistent steering input impact and feel, you should be able to compensate for higher trail with wider bars. 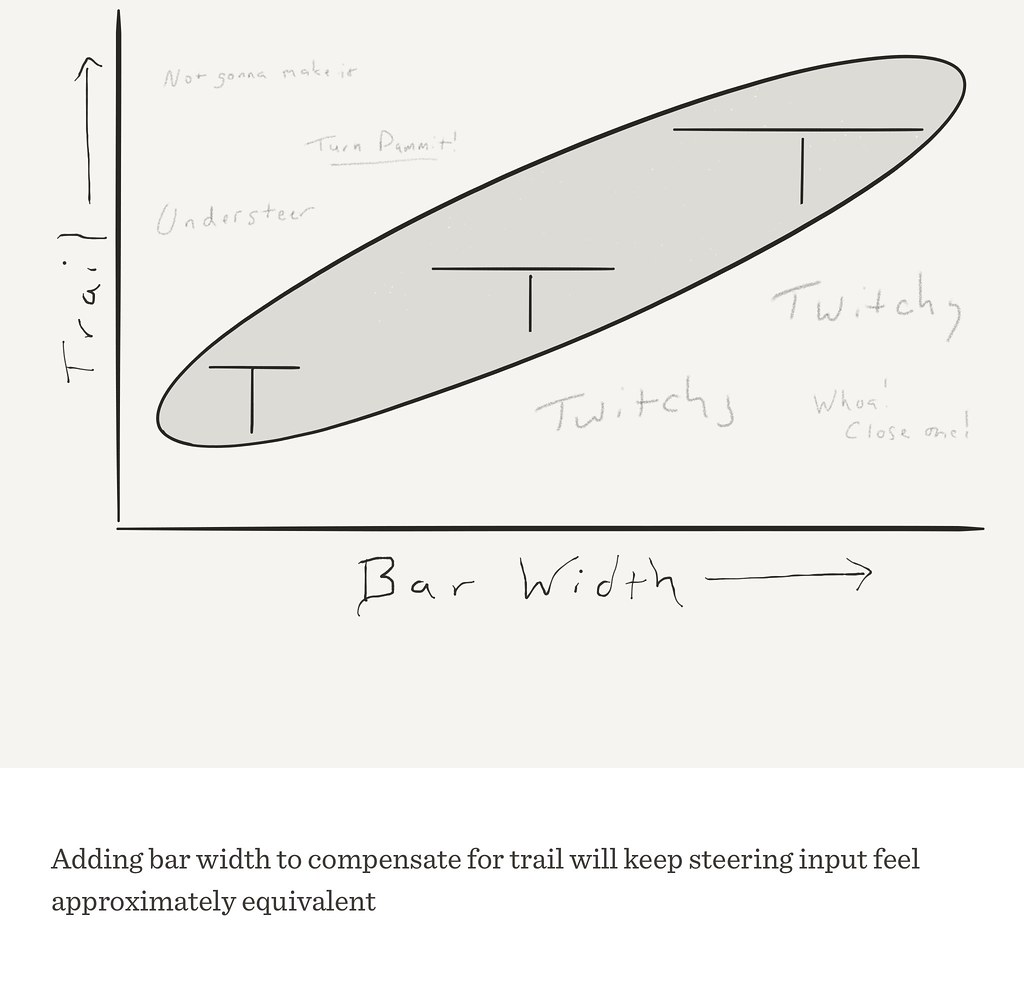 This is why offroad motorcycles/bicycles have wide handlebars, and most city or road motorcycles/bikes tend to have narrow bars.  Big generalization here, but I have definitely noticed this on several occasions. This is not really a discussion based on rider ergonomics and comfort, but a general handling conversation.  If you are a rider that needs a wider or narrower bar, it may help to understand how that will impact handling based on what trail geometry your bike has.

In prep for my last adventure, I wanted drop bars due to the length and time I would be in the saddle.  The Oregon Outback, at 360 miles and mostly dirt roads, would be an endurance test.  I wanted the most hand positions possible, and had done long rides in drops with plenty of comfort.  I used 44cm Noodles on my mid/high trail Hunqapillar with the thought that they would add a bit of leverage, but be very close to my “perfect” rando bar, the 42cm Noodle.

Reality was a bit different.  While I was plenty comfortable with the bars, and had no hand numbness or pain, there were several times where I wished for more leverage.  The amount of weight I had on the bike made these bars too narrow for the dirt trails.  I had to put a lot more effort into keeping the bike tracking at low speeds and up hills.  This was less noticeable when I was on nicely paved sections, but the dirt roads added difficulty.

On the fast downhills, the gyro effect tended to add to the effort required to steer.  I was hit by an incredible wind gust at the very bottom of a 30+mph descent near the end of the ride, and I barely escaped launching off the side of the dirt road.  If I hadn’t been near the middle of the road, it would have been grim – the bike tracked me all the way to the far edge before I got enough muscle into keeping on the road.

Lesson – I’m putting a wider bar on this bike.  Likely either the new Choco bars from Rivendell, or the Albatross/stache bars I’ve used in the past.  A nice Jones H-bar would be great, as well, providing even more leverage and plenty of hand positions. 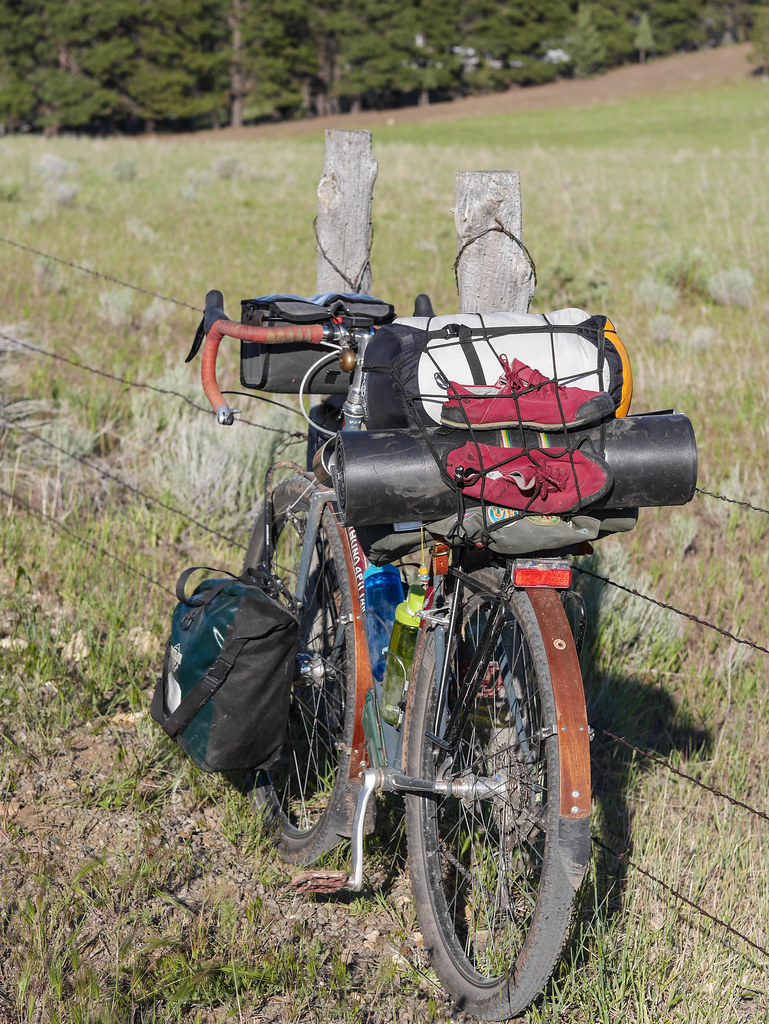 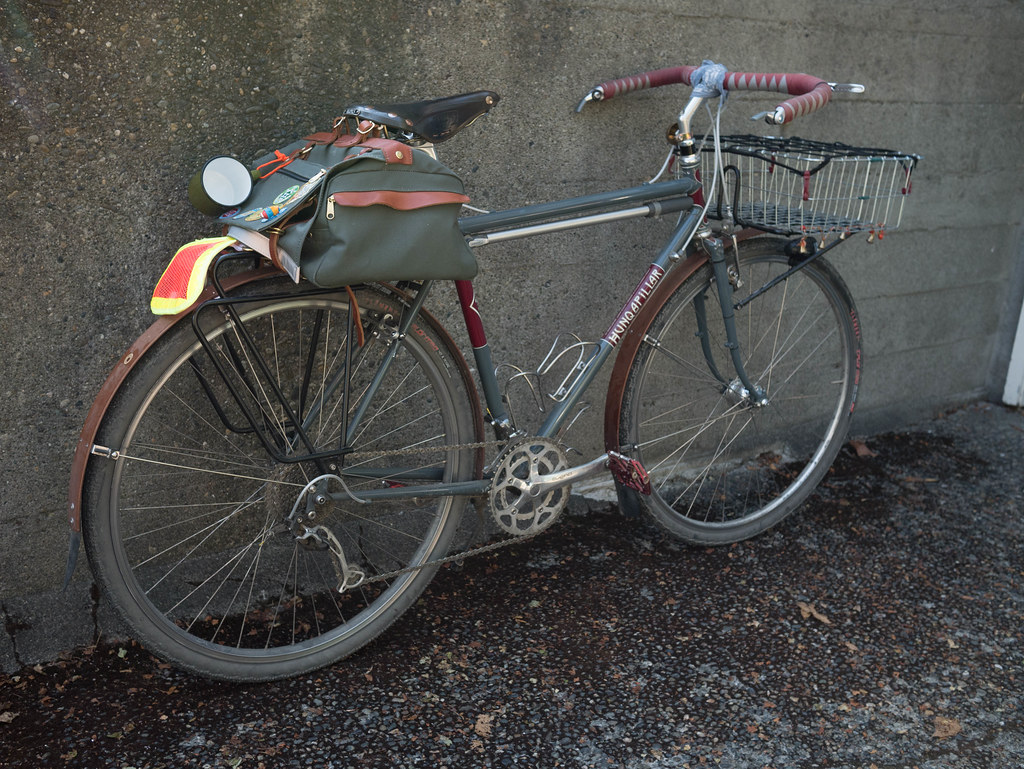 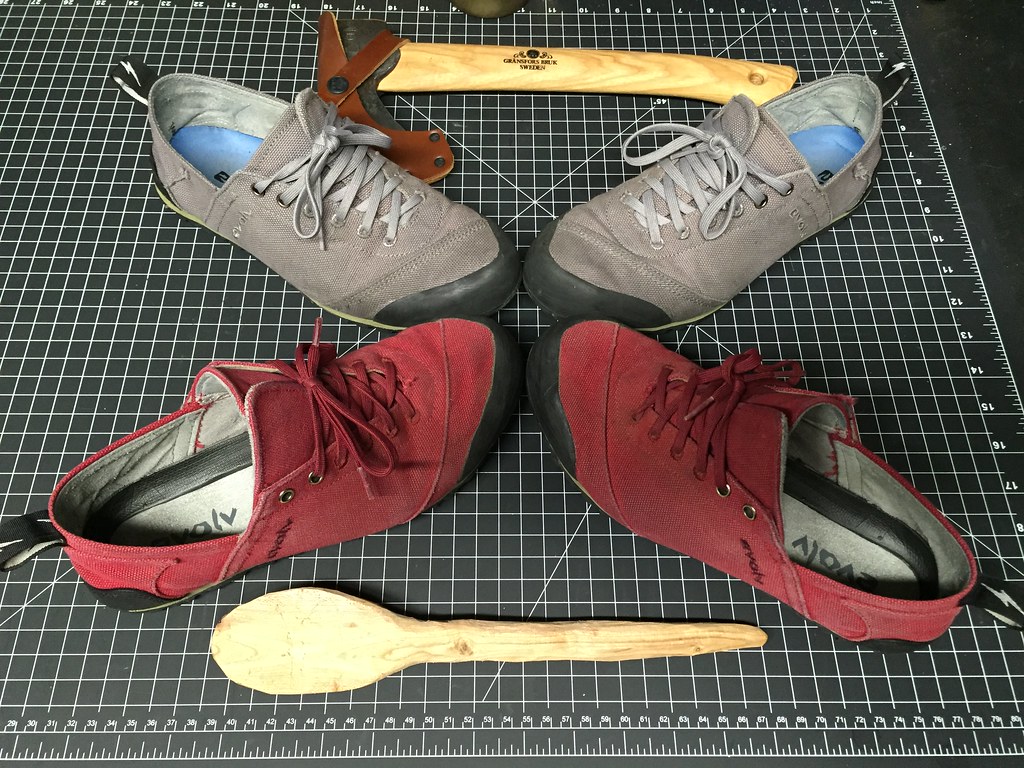 Big trips have a way of creeping up on me.  I’m heading down to Klamath Falls, OR on Thursday for a week in the Oregon outback, and I felt the need to re-do my bike today (and buy a new lawn mower).  Is this trip nesting? 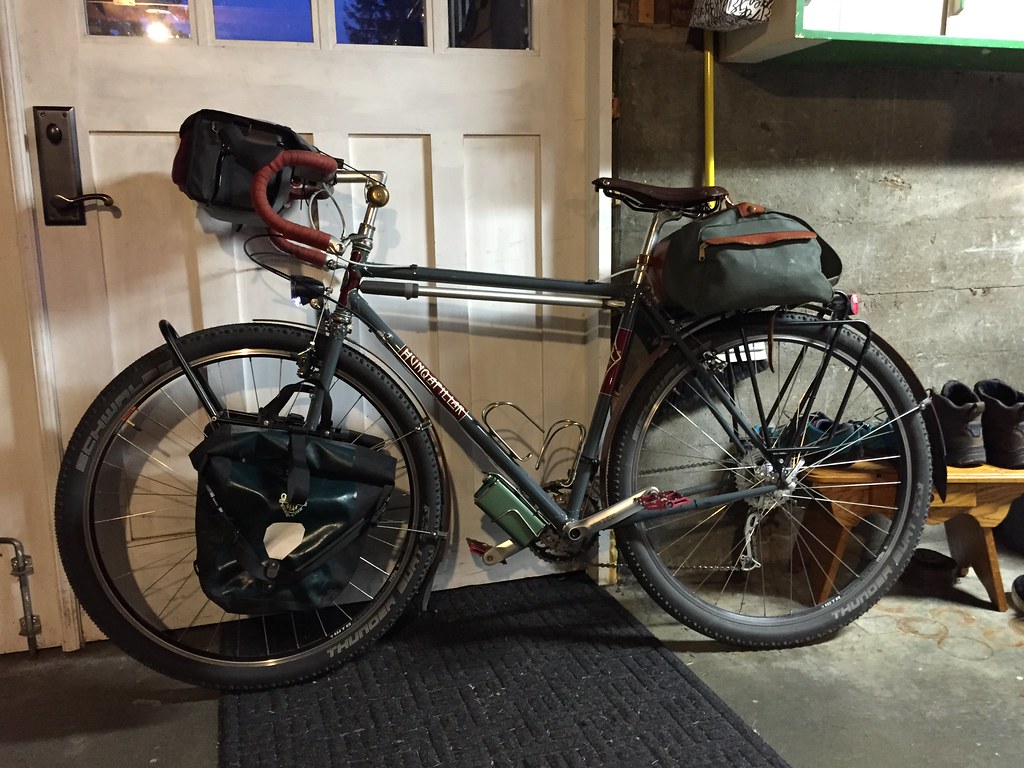 I am borrowing a pair of panniers from a co-worker for the trip, but I still feel like I’ll be strapping a lot of extra stuff to the bike when I finally set out.  I have a bike box thanks to my touring partner, but I haven’t even started to pack up yet.  At this point, I’m going through my various camping lists from past trips, and trying to figure out what I may and may not need.

As for food, we made a list based on each day and where we think we will be.  There are a few small towns where we hope to re-supply and perhaps even dine out, but will be carrying some minimal food in case we get lost.  I’m bringing a bunch of Perpetuem, since it seems to agree with me on the rando rides.  Light weight calories are a good backup.

Only a few days left to gather everything and make sure it fits in my bags.  I also have to pack the bike into the box and get everything taped up and secure.  I’m really starting to look forward to this trip!