This was a day of big breakfasts, big climbs, big miles, and some of the best riding and views of the trip.  My favorite day hands-down.

20 miles out of Big Bend campground, Prineville was the only “large” town we went through in our five days. We were drawn to the first diner we came to on Main St. My eyes were only a bit larger than my stomach. 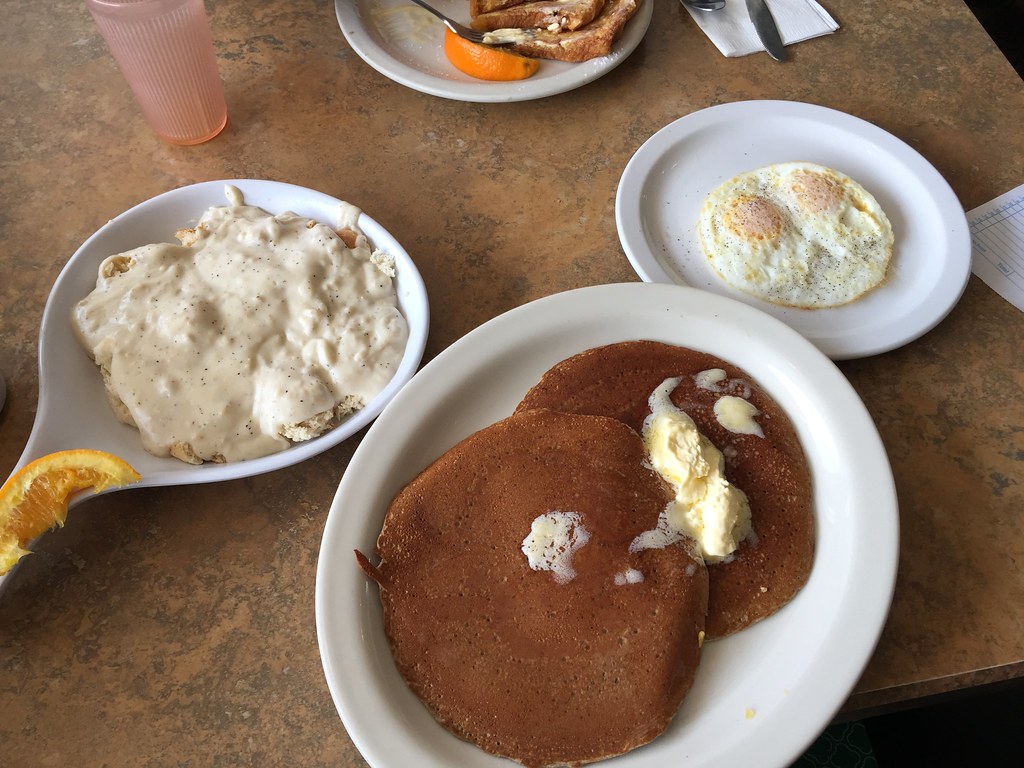 – Yes, had to have the buckwheat pancakes, too! 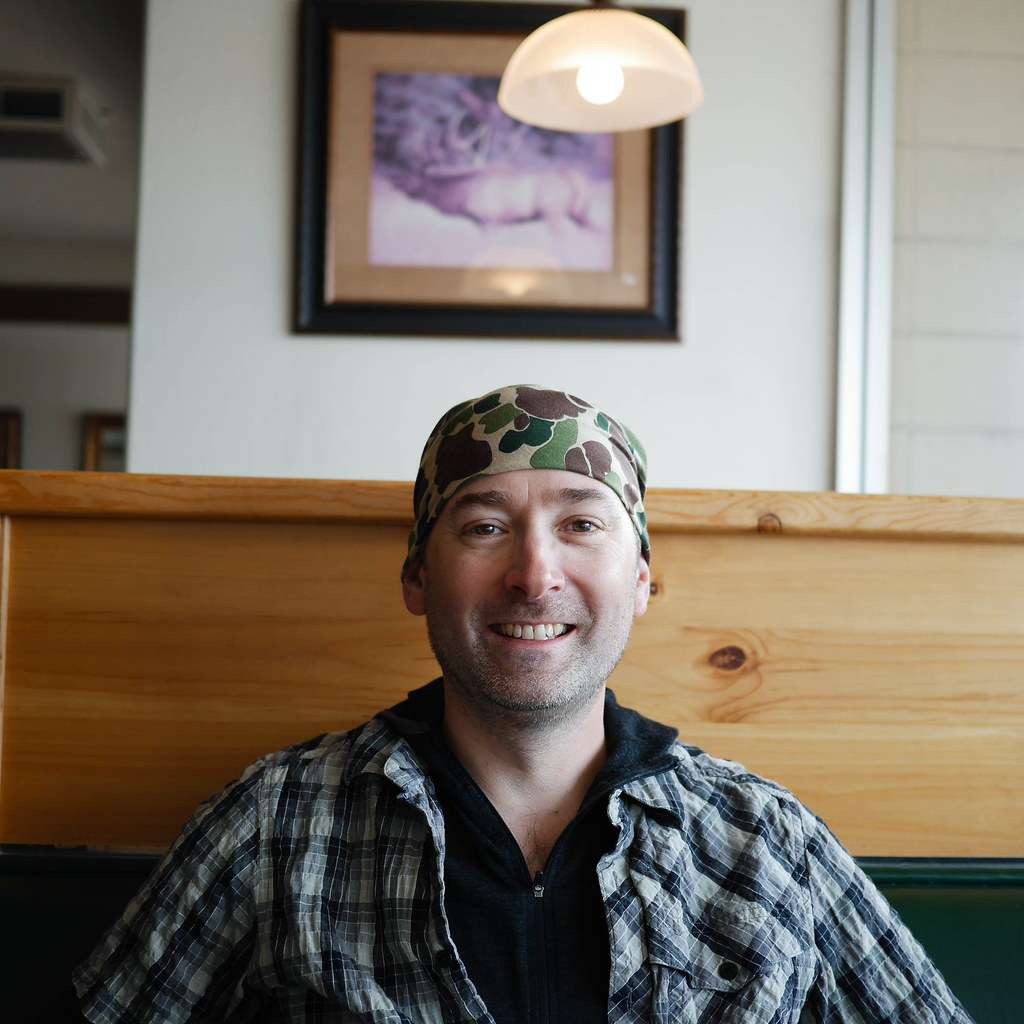 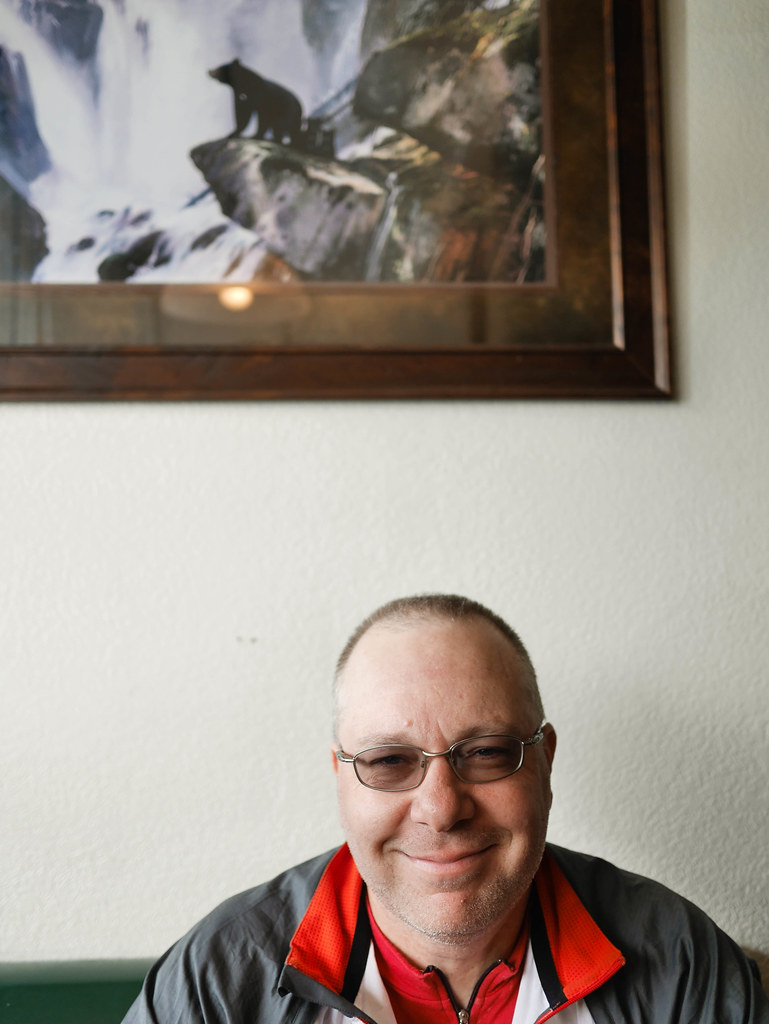 After eating our fill, we stopped at the grocery, and realized we still had plenty of food for dinner and lunch. I think we picked up more gorp, string cheese, and some Tylenol. I was starting to get a good picture of how over-packed we were.

The local bike shop was closed, so we couldn’t stop in for the legendary beer we heard about from other riders. Sad face…

Onward. Approaching the first big climb of the day around mile-25, the scenery was really turning out well. 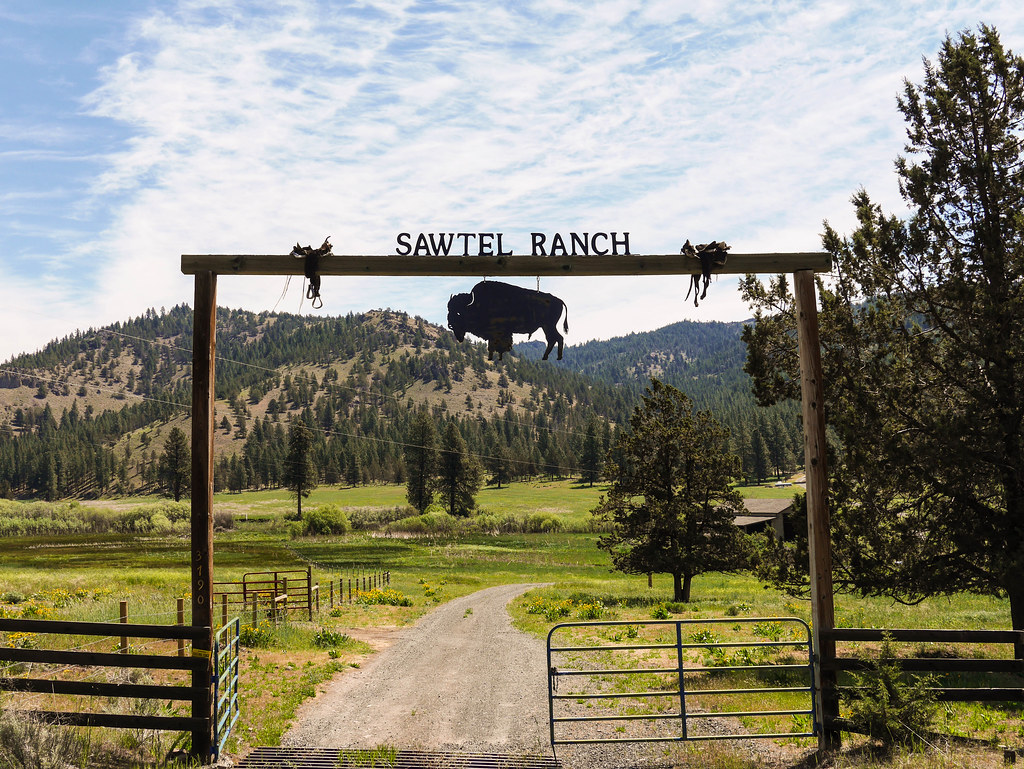 This climb was paved, but rose about 2200 feet over 17 miles.  Not too taxing – still early in the day, and at the top we rested with a few riders and compared tires and notes. 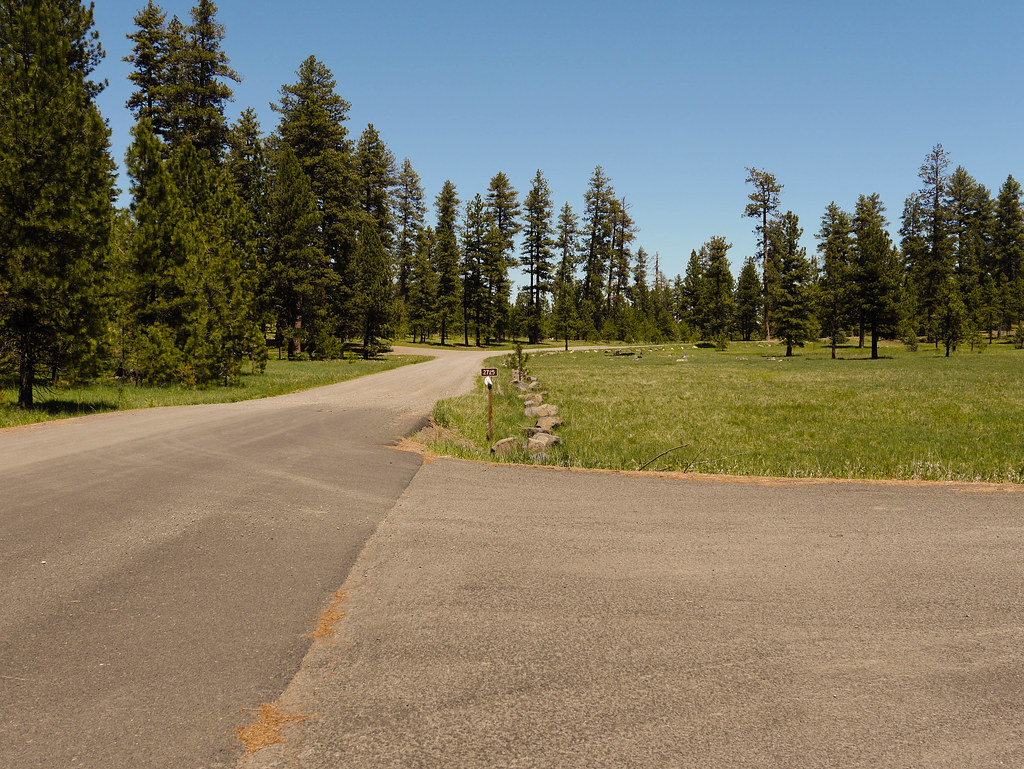 – The beginning of FUN

The next 10 miles were amazing.  We were doing 25+ mph gravel switchbacks down Little McKay Rd.  Loads of fun – edge of control with loaded touring bikes.  At Trout Creek Rd, the route degraded to jeep road, more or less, and we ran into the creek crossing the road at least 5 times – sometimes 5-10″ deep, but at most 10-15 yds across.  The first time was a circus with a large group of 5-10 folks hanging out taking pics and refilling water bottles.  We did the same.  I did a quick song and dance for Sprockets Podcast (one of the riders had a mic and was doing impromptu interviews of OO riders). 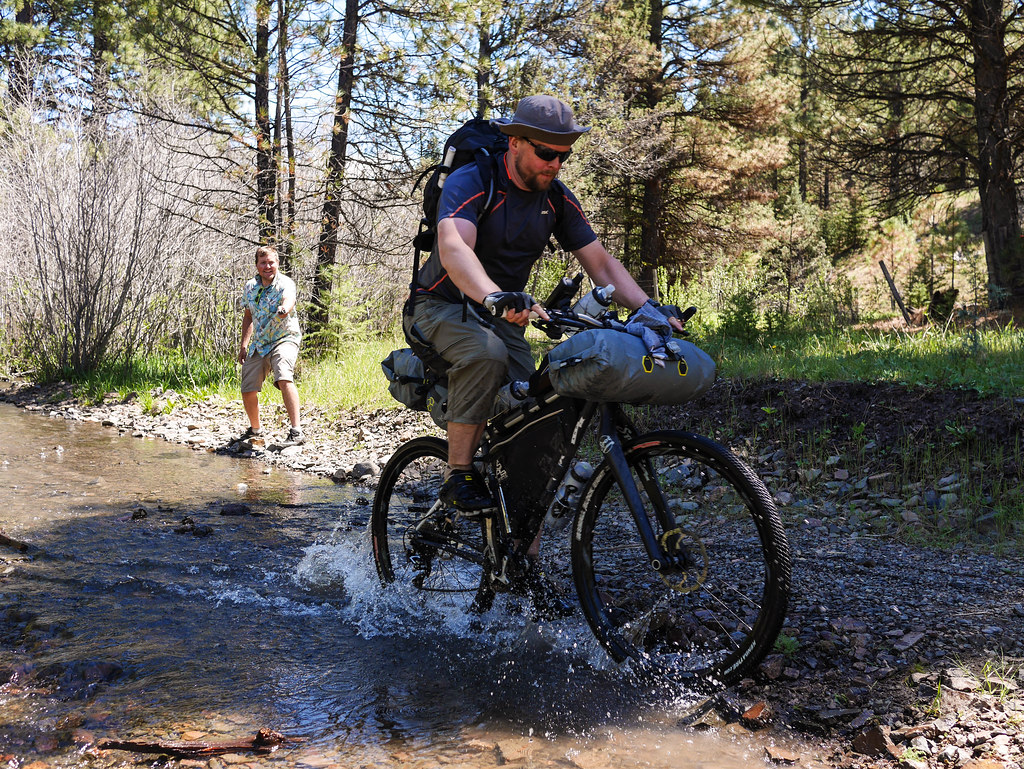 One of the riders in the crew was doing it on a Yuba carrying a hibachi grill. Awesome! 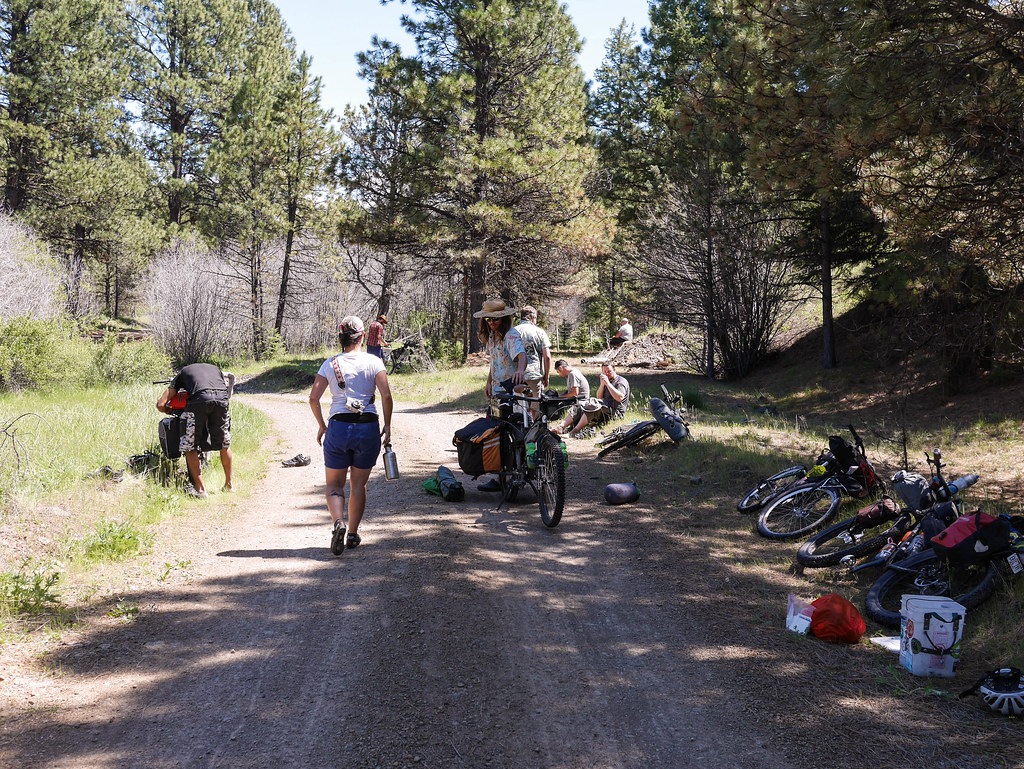 The next crossing was deeper, and we hit it faster. My panniers managed to put up a blanket of water spray that soaked me thoroughly. In darker news, the rocks managed to kill my cameraman’s front Thunder Burt with enough of a pinch flat cut that the Stan’s sealant was of no use. Tube time. 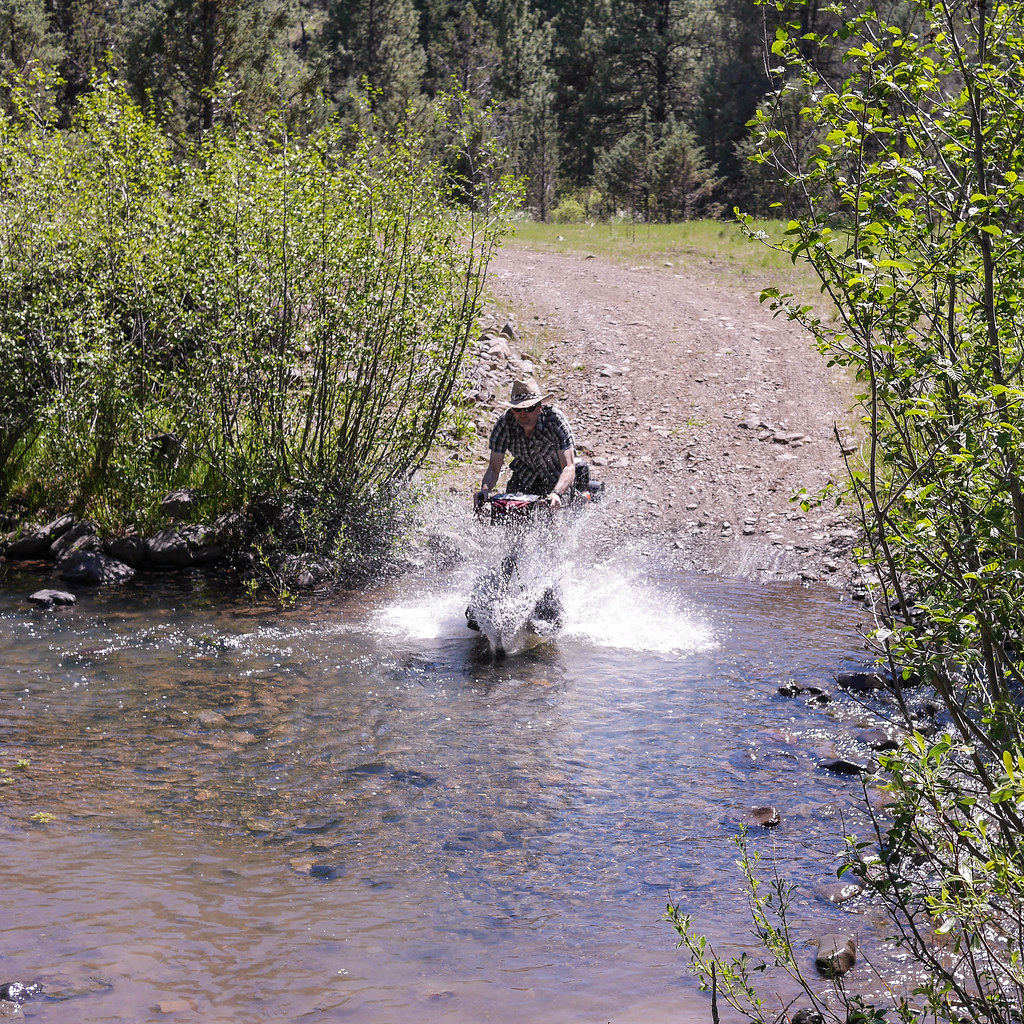 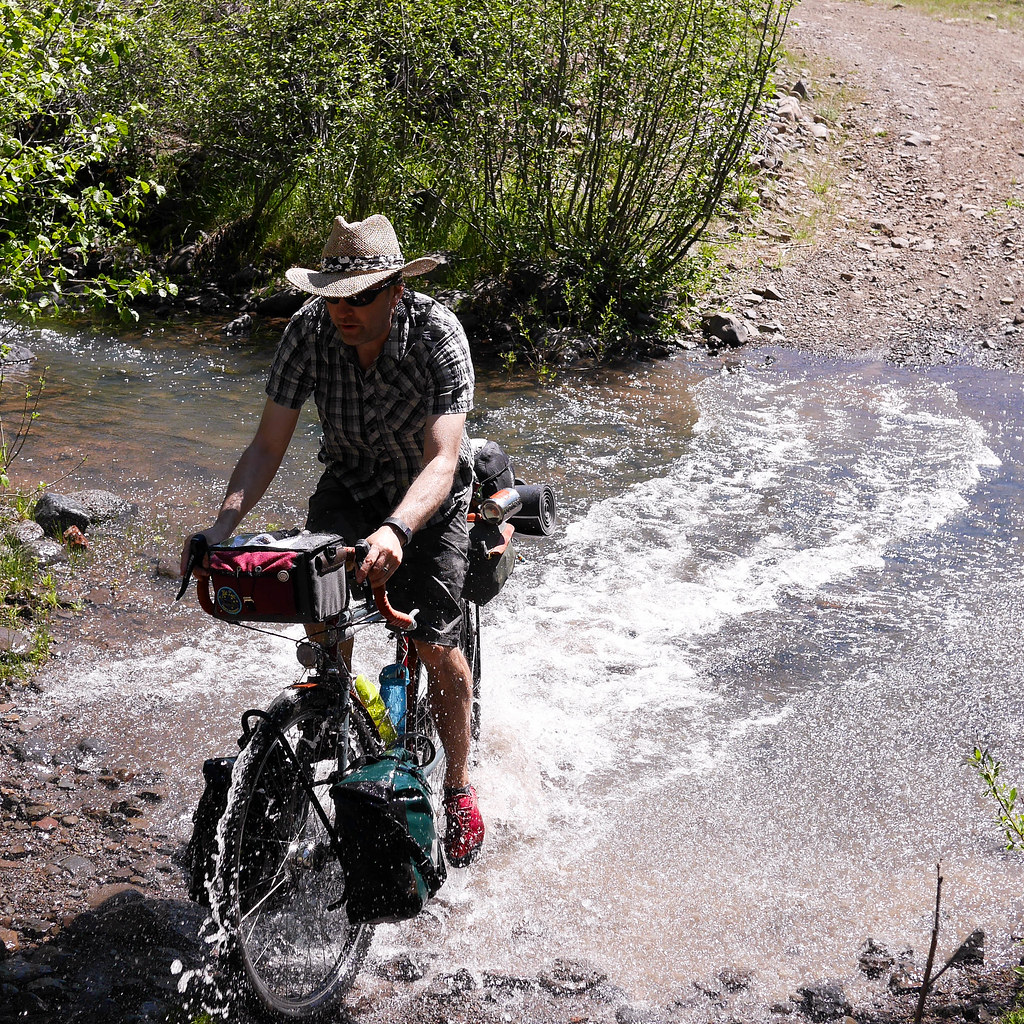 The next guy through – a solo rider from Seattle – managed to double flat. This was after a single flat in the last crossing. We spent the next 45 minutes putting a tube in John’s front wheel, and helping the other rider out. 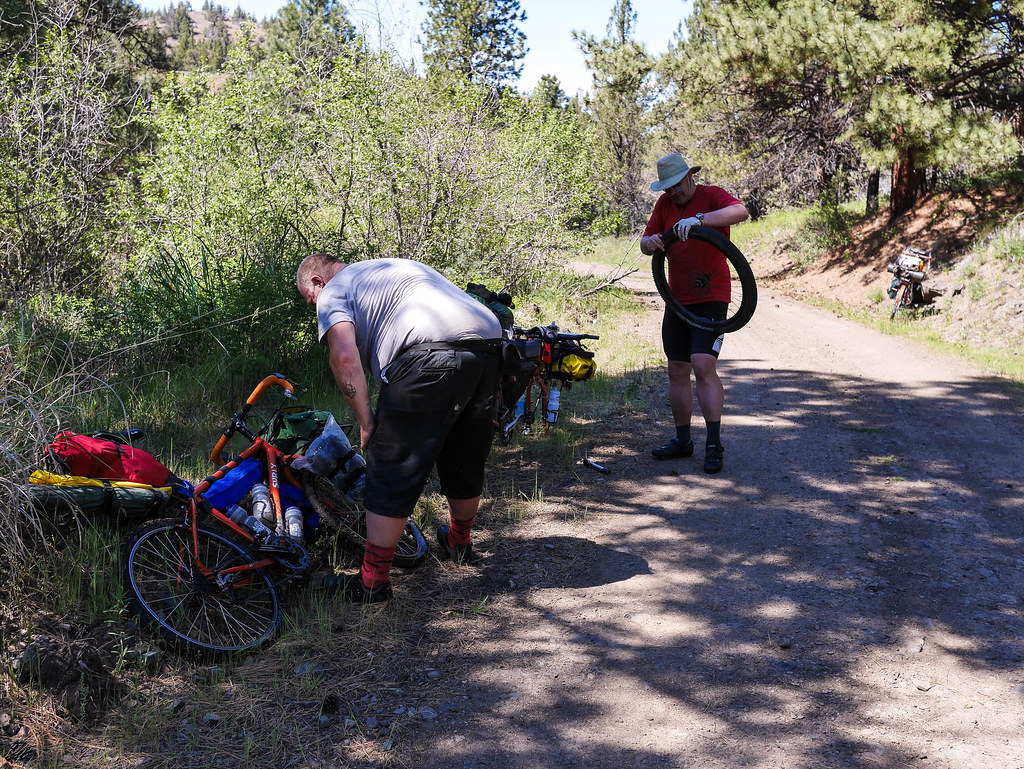 Needless to say, we were more careful on the last few crossings, walking several. Hey – the shoes were already wet… 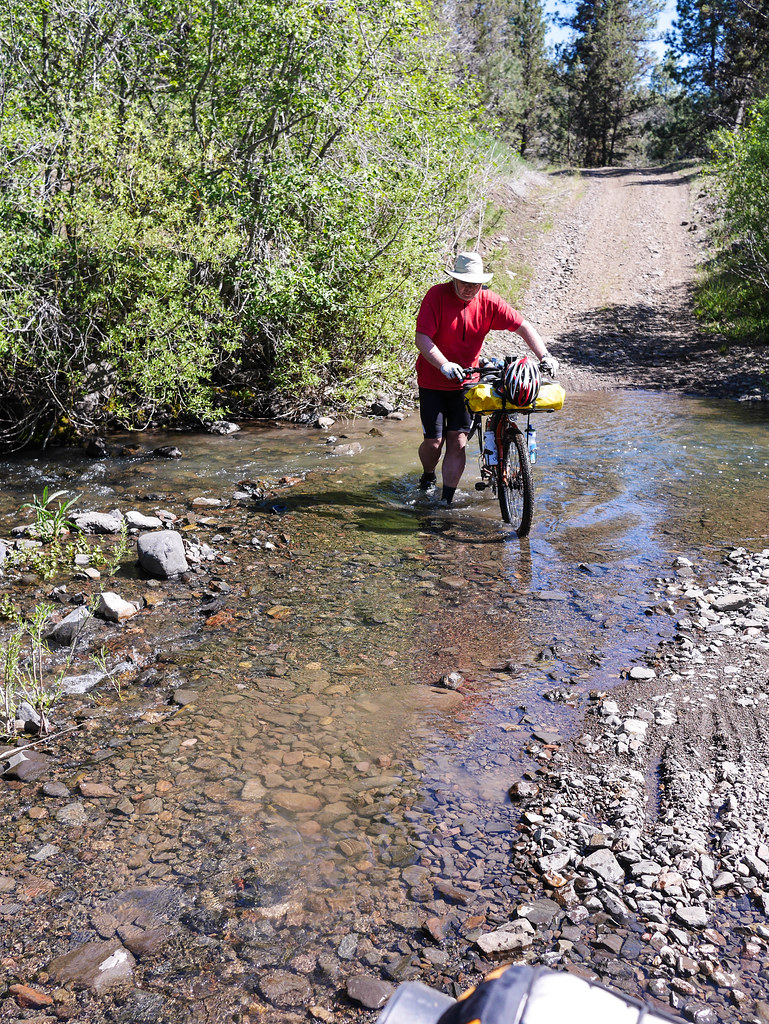 – Care must be taken

The rest of the descent was uneventful, if not a bit roller-coastery. I later mused that this was my absolute favorite part of the ride. Remote and scenic. 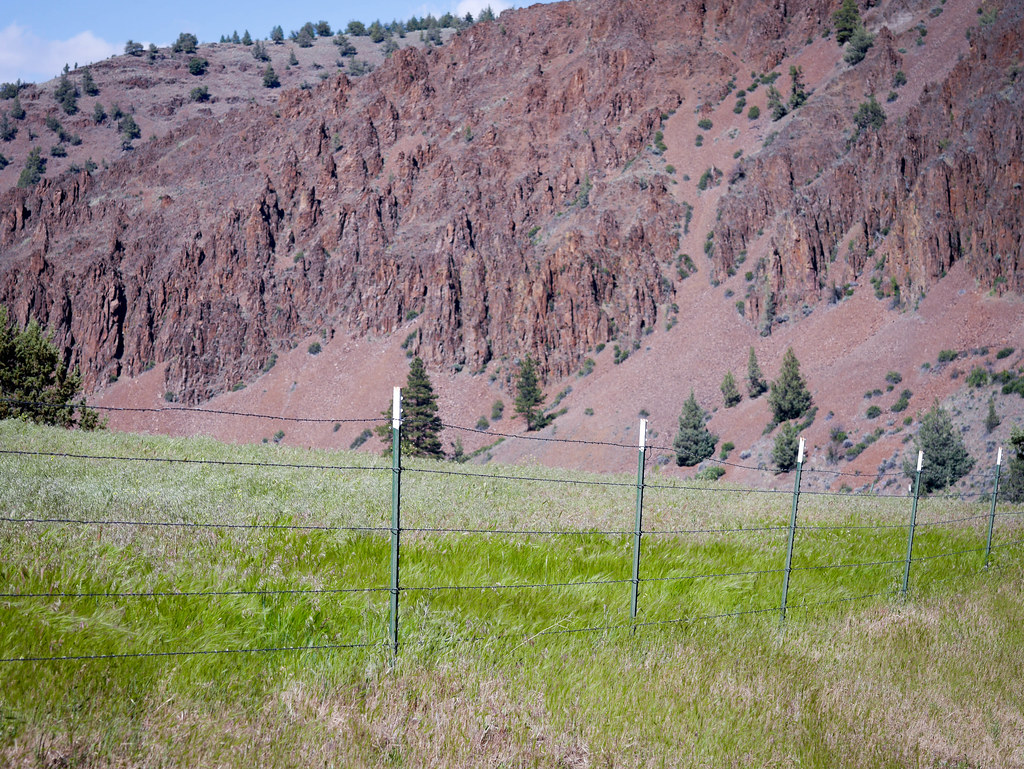 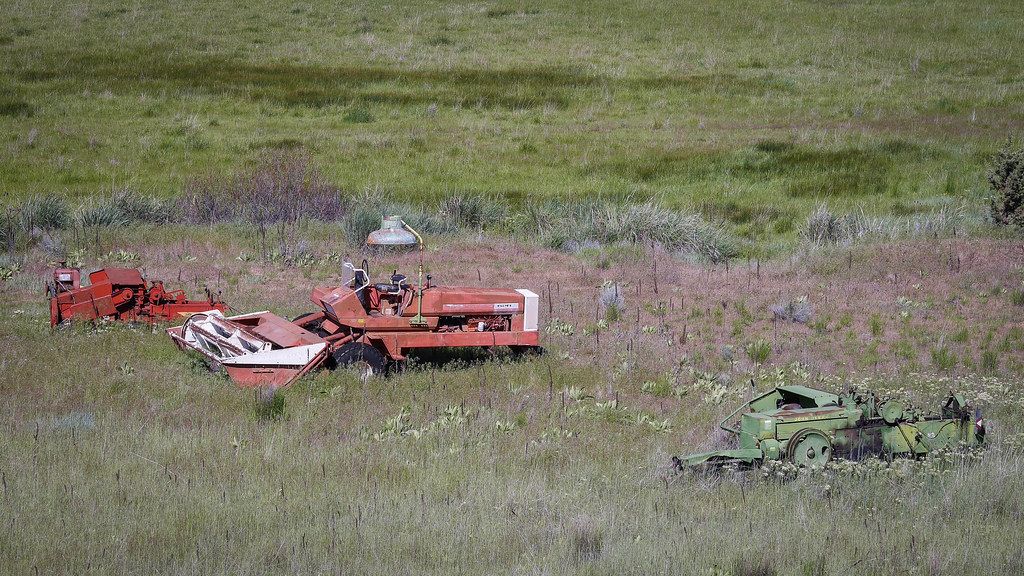 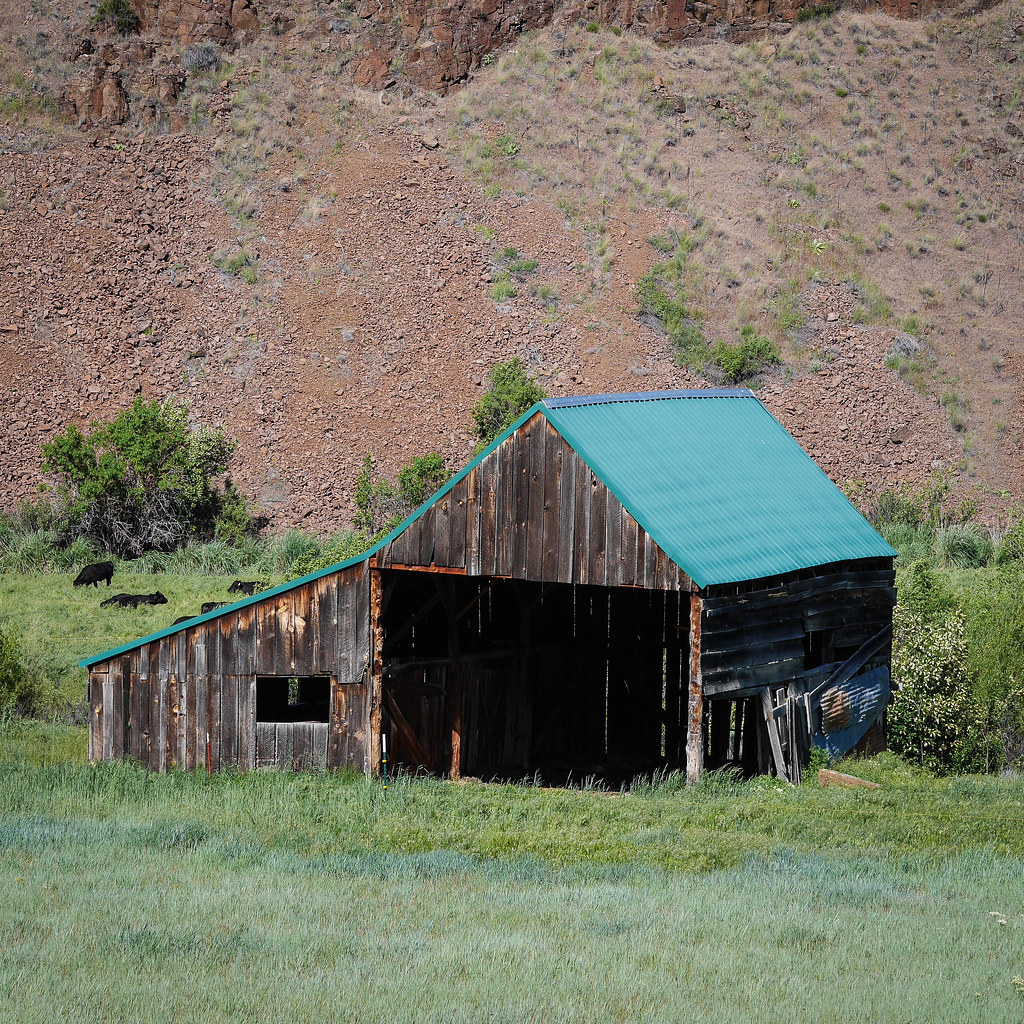 Nearing the bottom of the valley, we approached Ashwood through Fools Hollow and Slaughterhouse Gulch, (yes – look it up), what looked like a small town turned out to be about 5 houses, a short few hundred yards of pavement, and then a wall of a climb out of the valley on a gravel road just outside of “town”. Gosner road was a 500 foot climb with 8-12% grades, and it was fairly brutal after all that nice downhill progress. At some point, I tried hopping off and walking, but I quickly found that harder with a fully loaded bike than just sucking it up and pedaling in the easy gear. 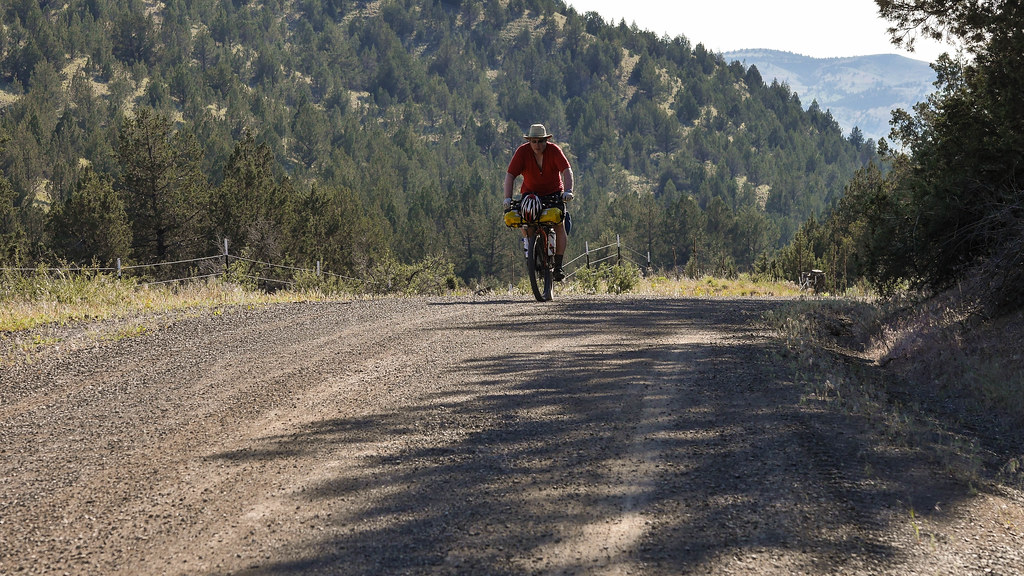 – John breaches the first rise out of Ashwood

Thus began our quest to get over the latter two 1000-foot climbs of today’s route. I kept thinking we must have done it, but we would just come to another rise. I started to view climbs in a different light. I found myself hoping that the next corner would just reveal more climbing instead of relief, as I wanted to get the vertical I knew we had coming. It turned almost meditative with me concentrating on nose breathing, and just pushing on. Really kind of peaceful. 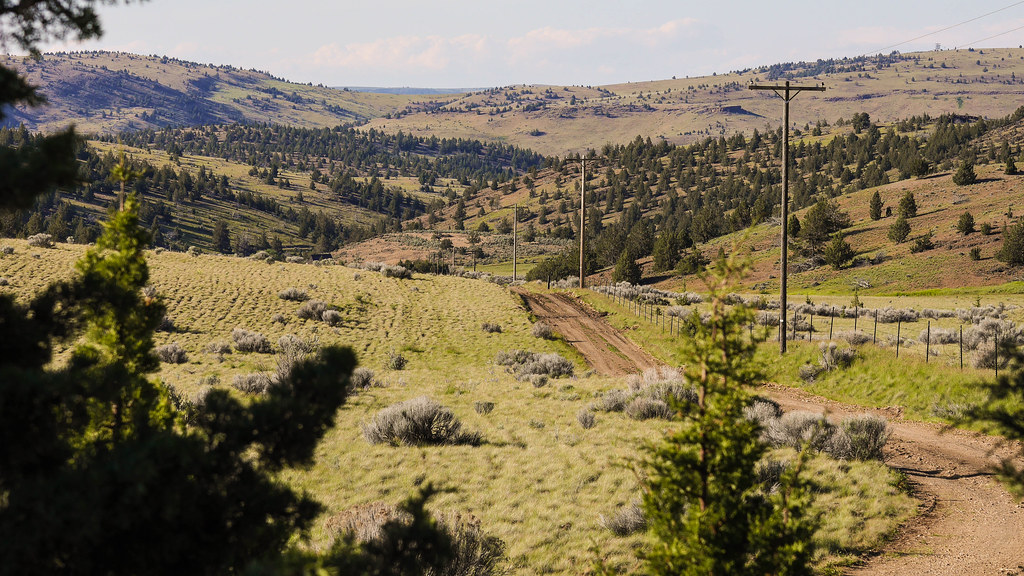 Again we rolled through some amazing western scenery. I think we saw 2 cars this whole stretch, and fewer riders. The terrain was continuously rolling and slightly brutal after the long day’s riding, but so pretty that it kept things interesting. We were constantly looking for trees now as it was our normal camp time, but alas, we were not finding much to hang a hammock on that was on the right side of the fences. 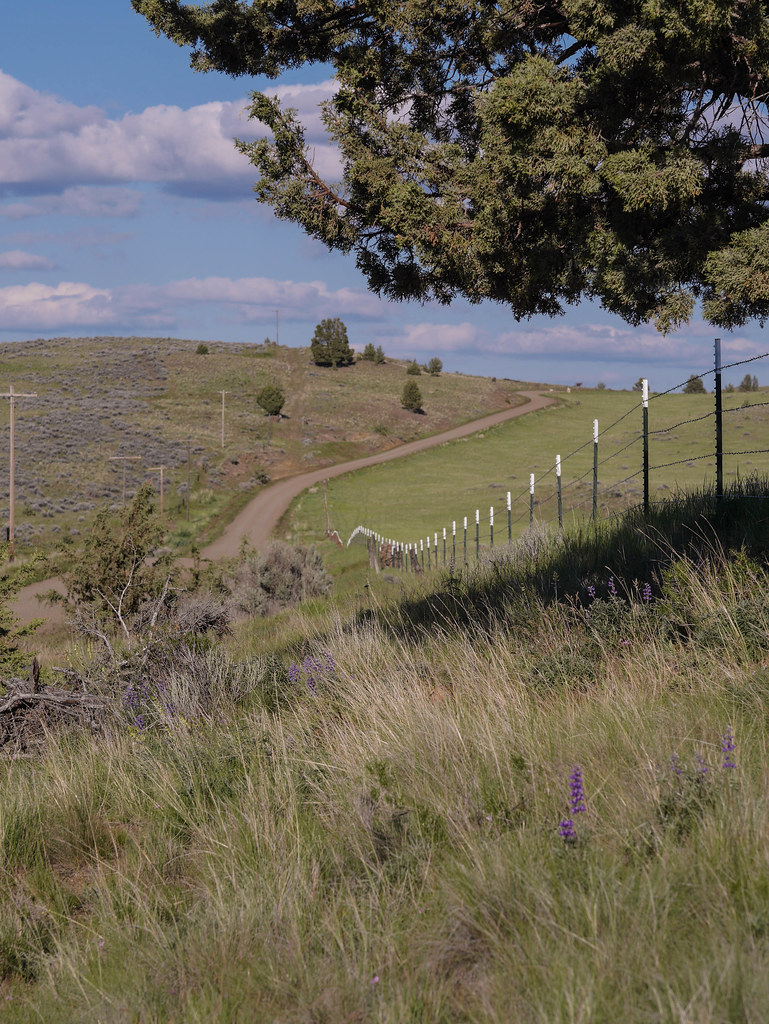 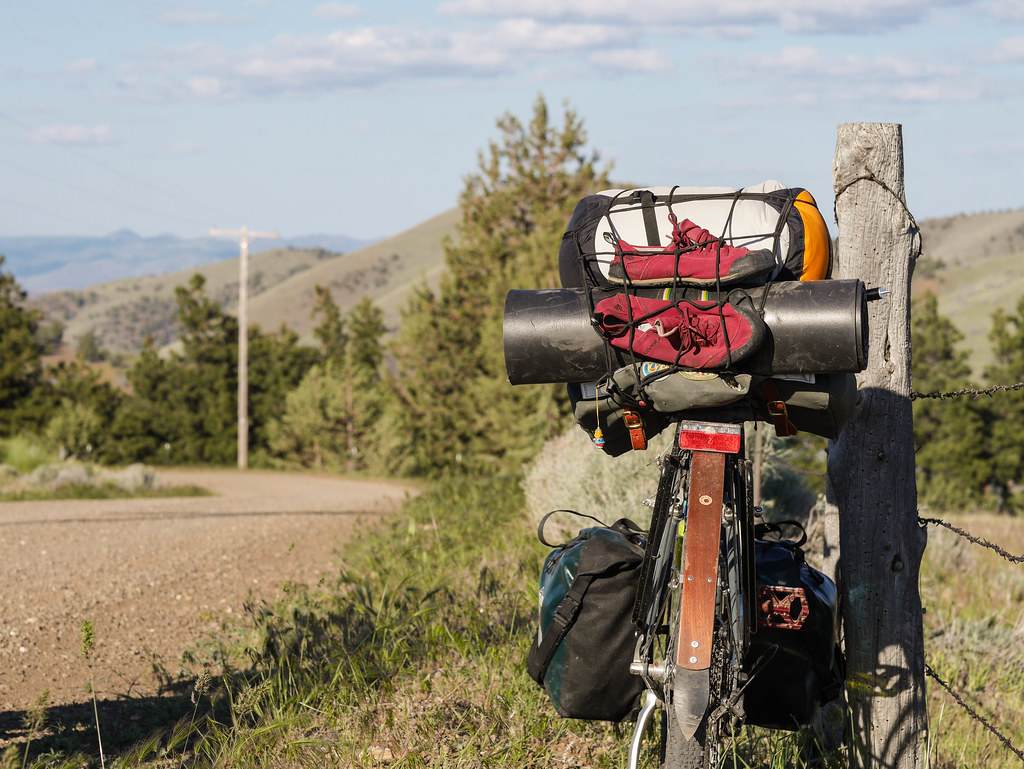 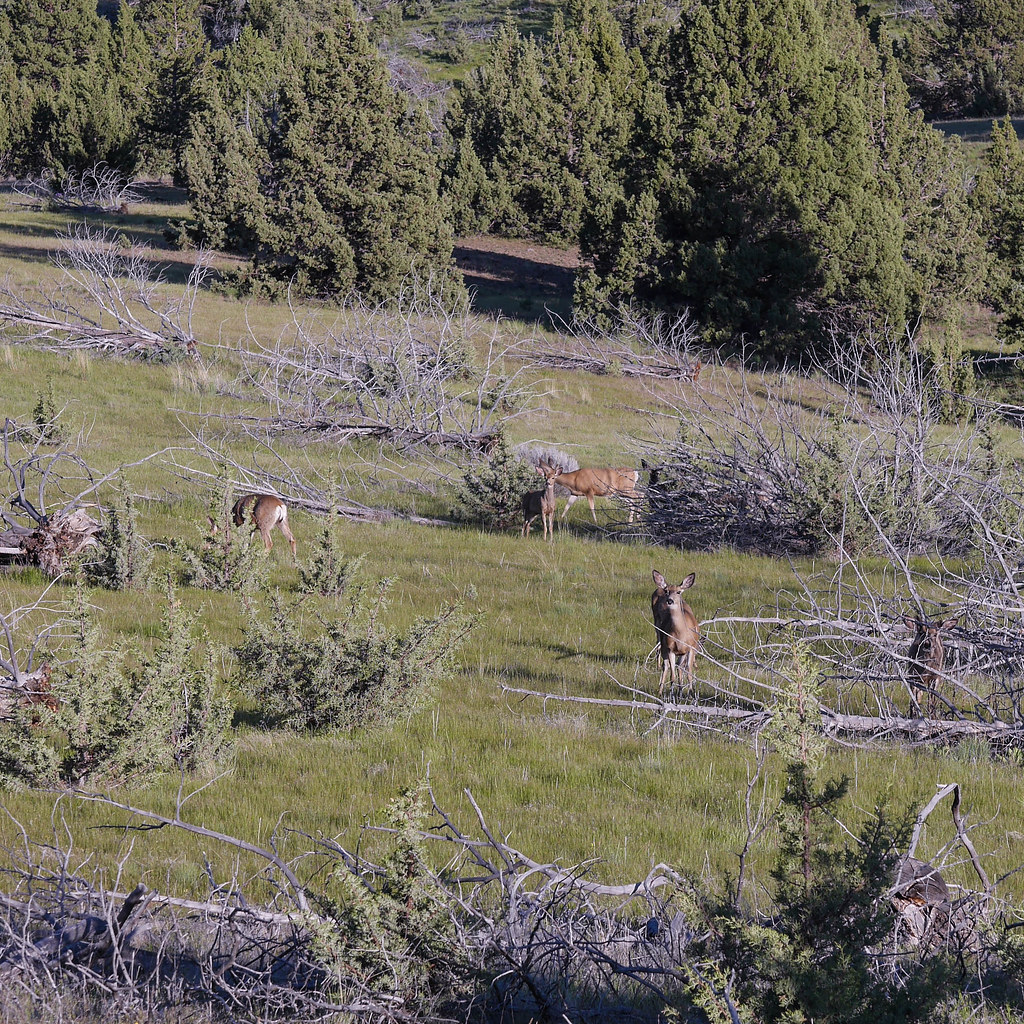 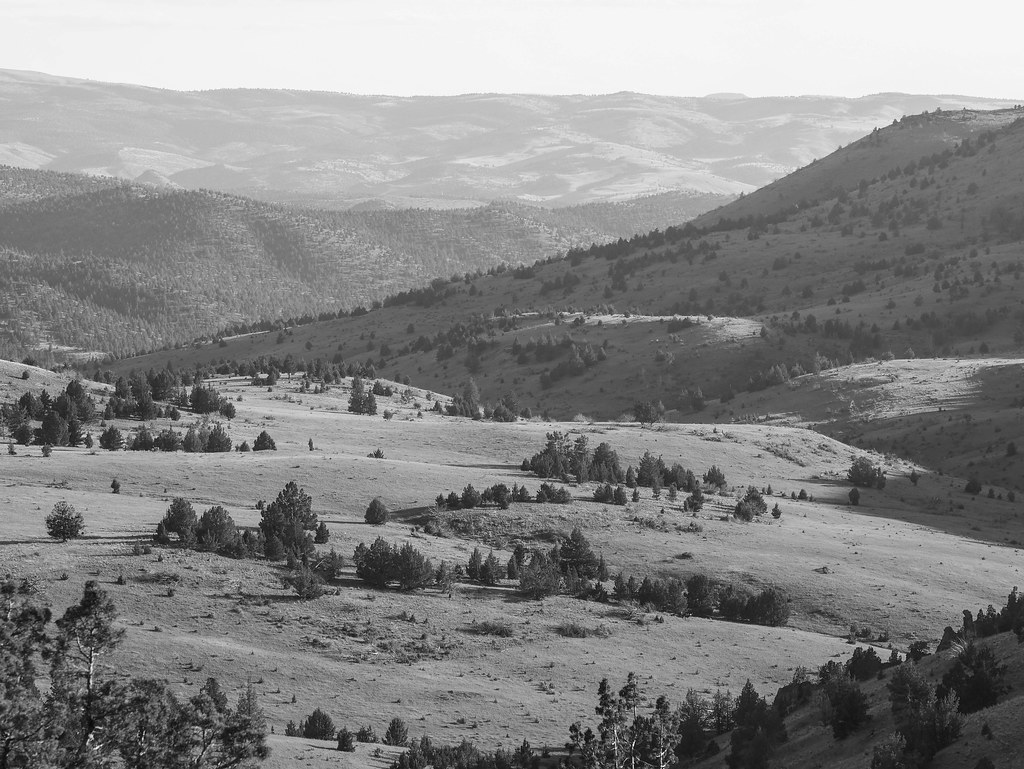 As we broke through the long descent into Antelope, I looked longingly at the city park with its big cottonwoods (slightly too big to put a hammock on). We only saw a herd of deer – we could hear music playing in one of the local homes, but no people were out. 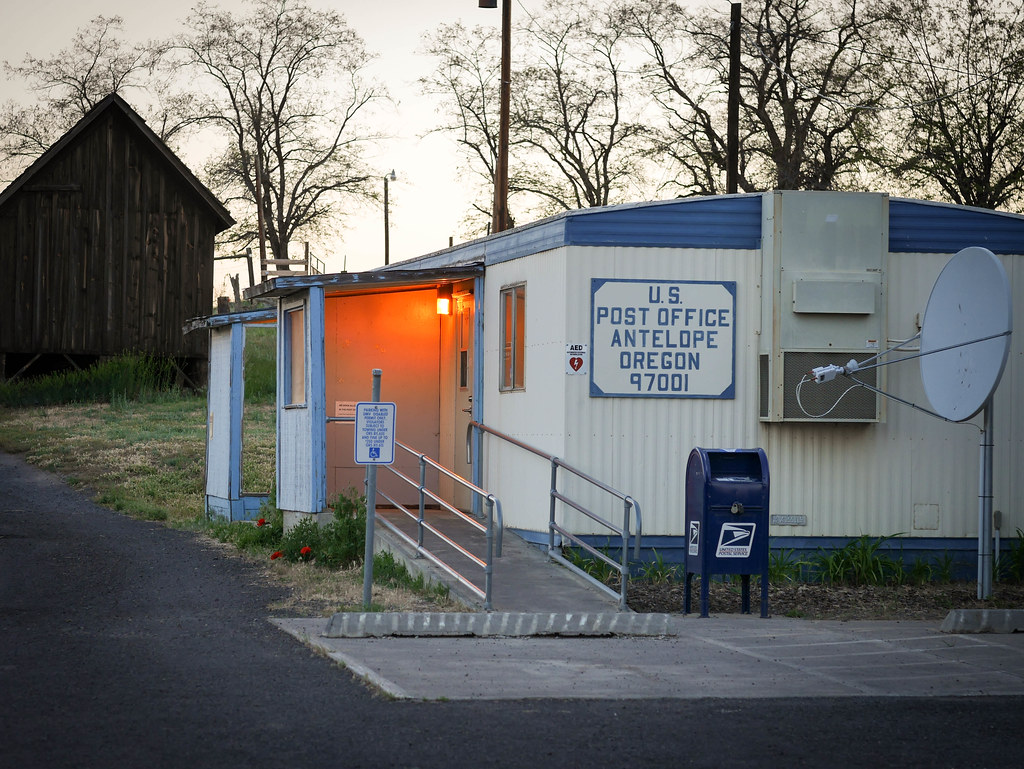 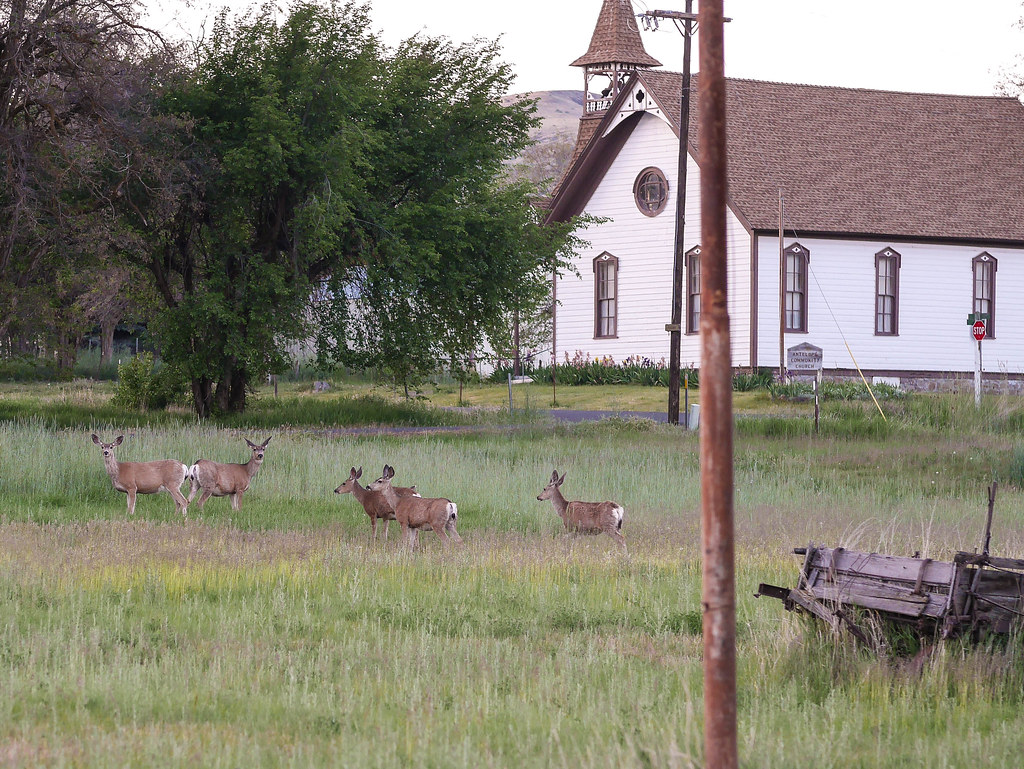 With about 10 miles to go before our Shaniko camping destination, we at last hit the final 1000-foot climb. It was paved at least, but just as steep as the hills before. We rolled into Shaniko after a final paceline drive into the darkening sky. The kind folks who got there before us had saved some community food donated by a women from the local post office. I had some wheat thins and Spam, and John had a PB&J. We tied our hammocks to the posts sheltered by an old “wagon house” structure, and slept soundly. At nearly 100 miles and 7300 feet of climbing, it was our toughest, but most rewarding day.